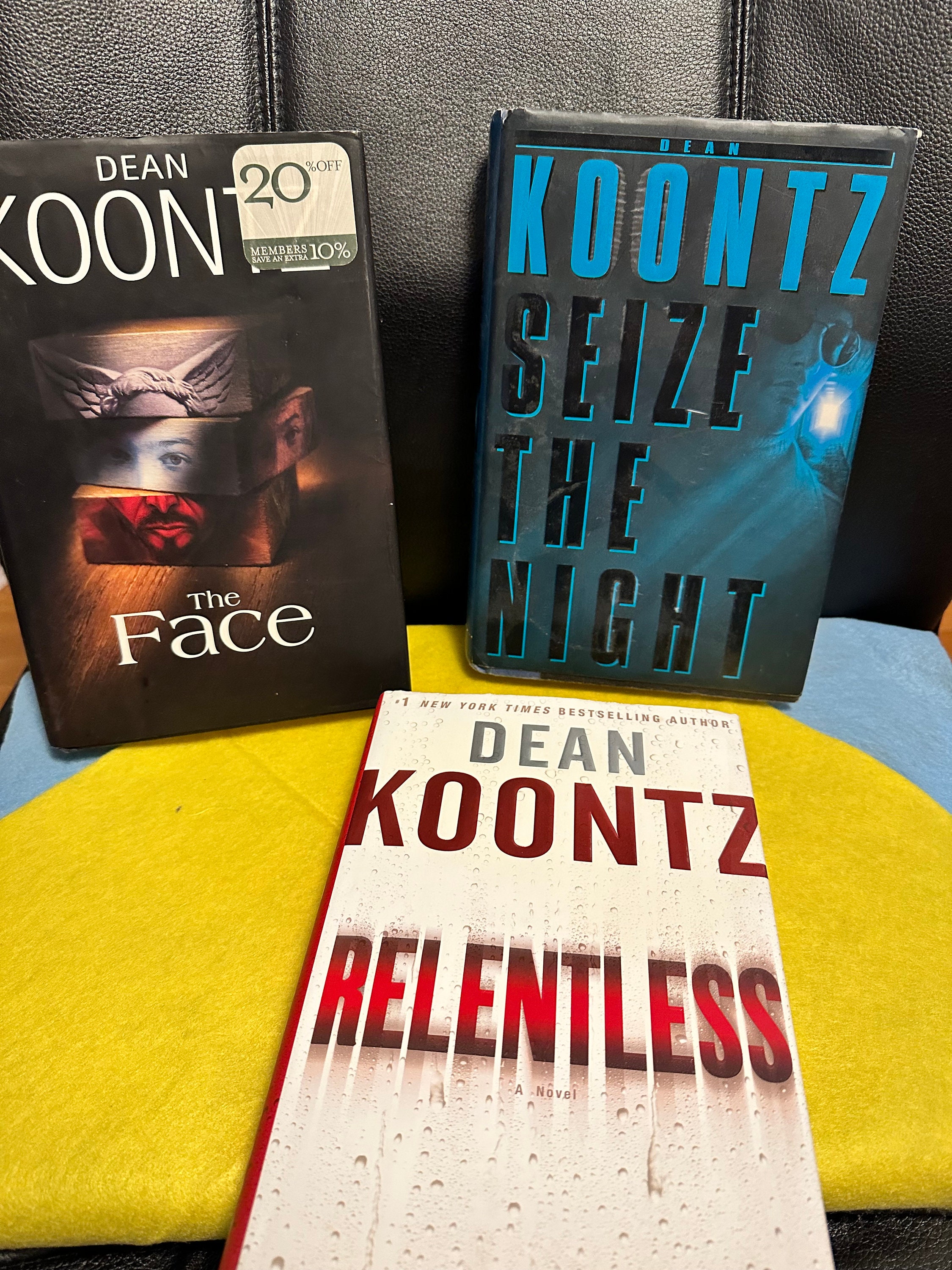 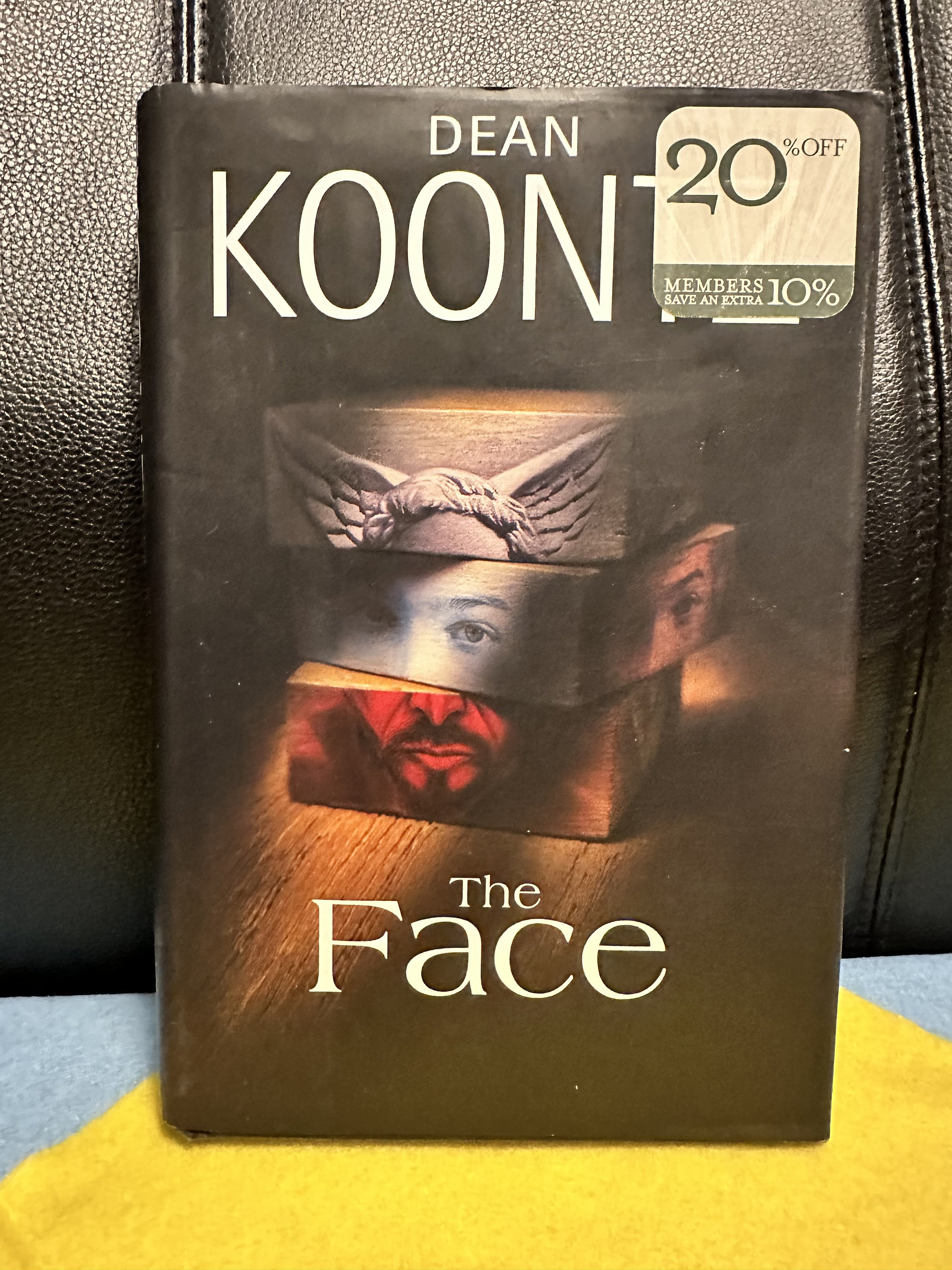 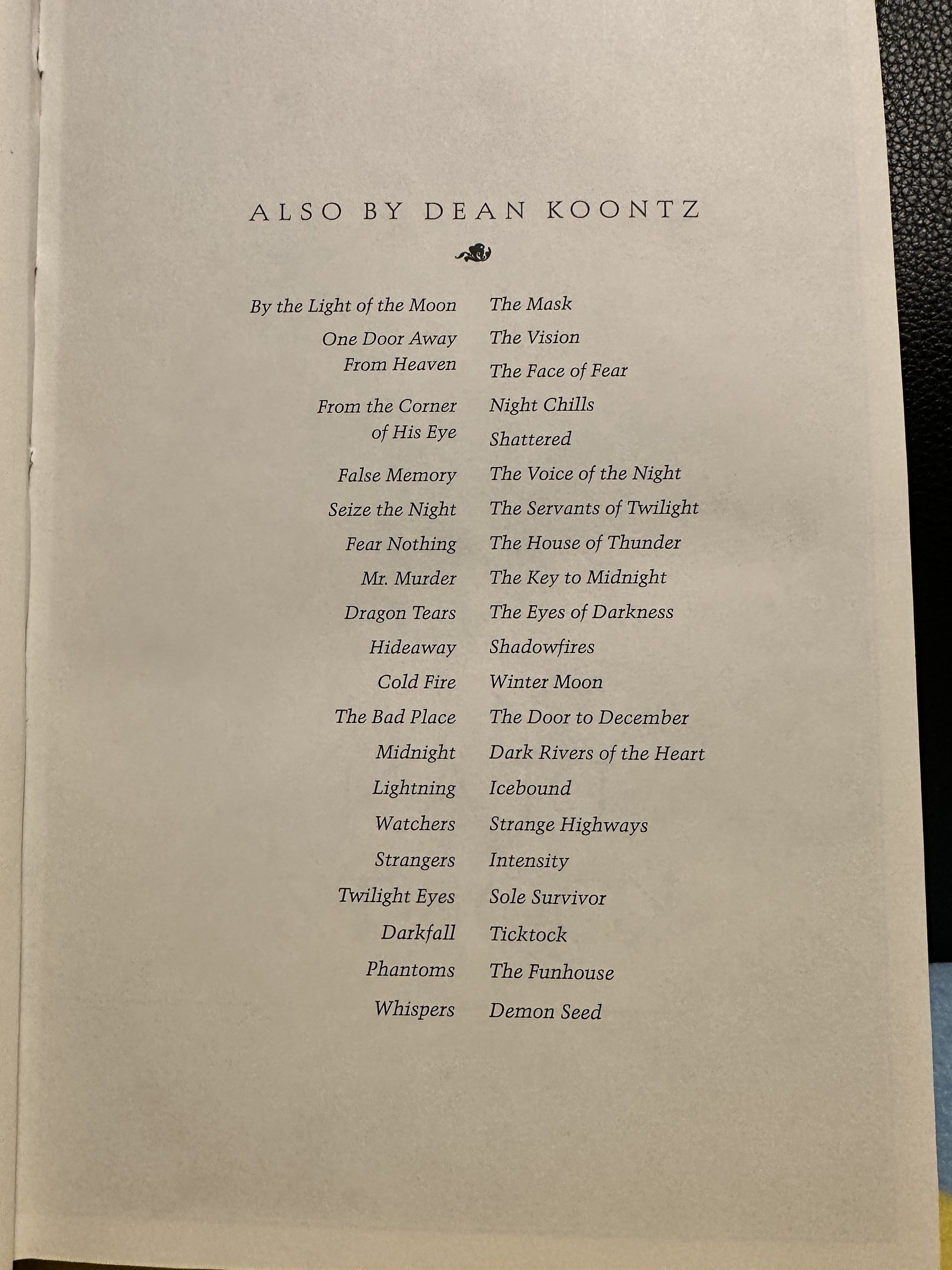 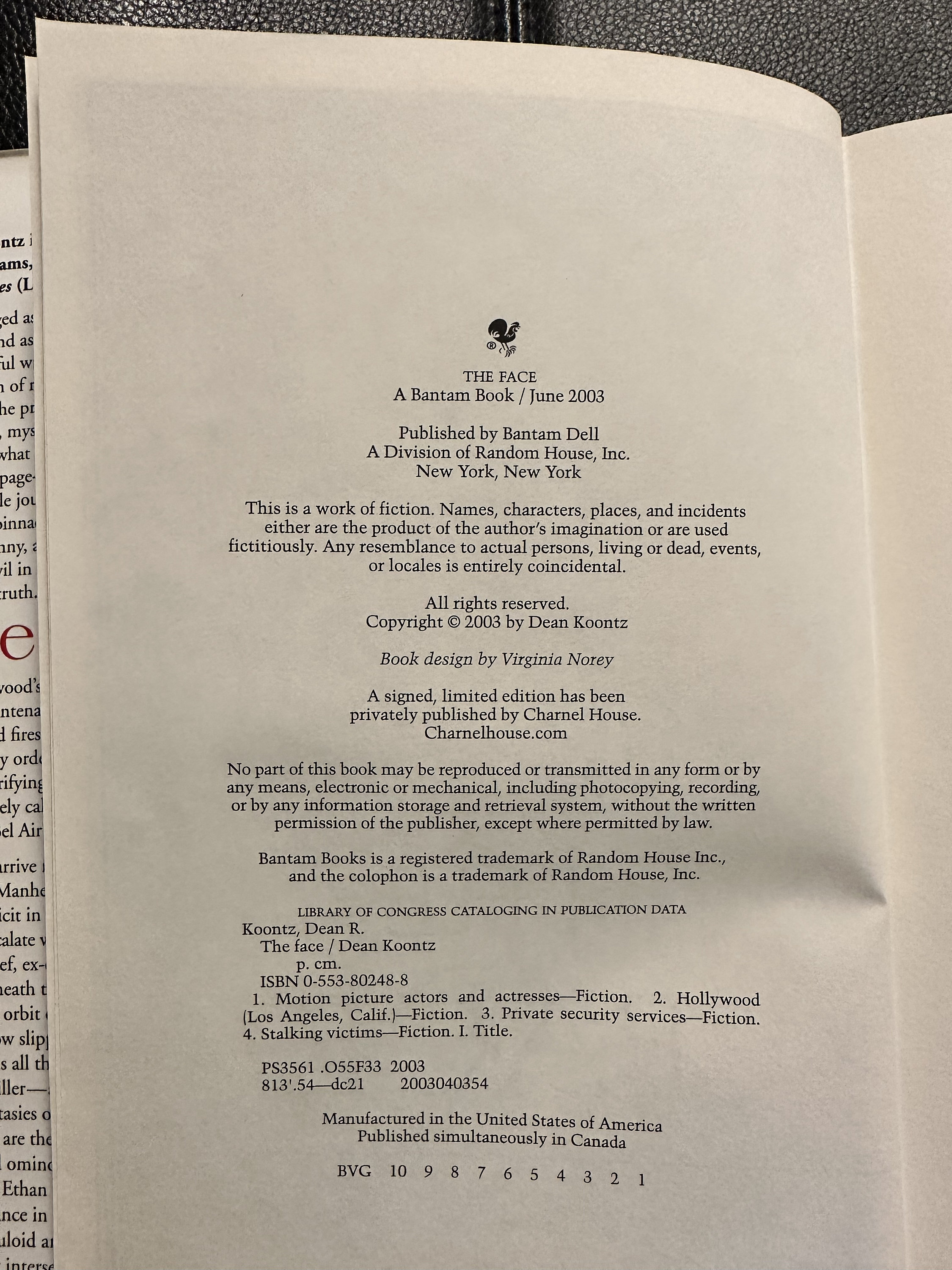 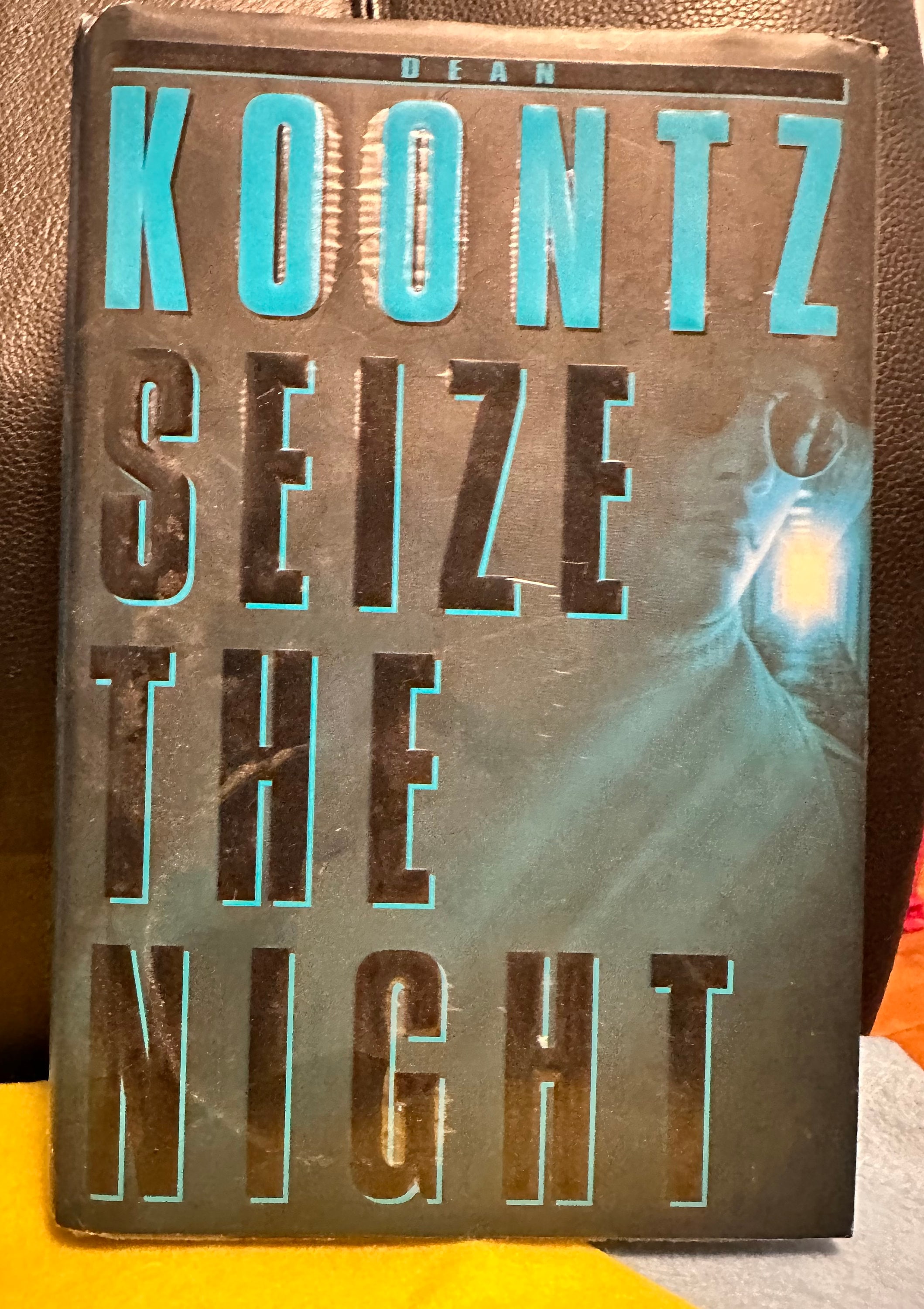 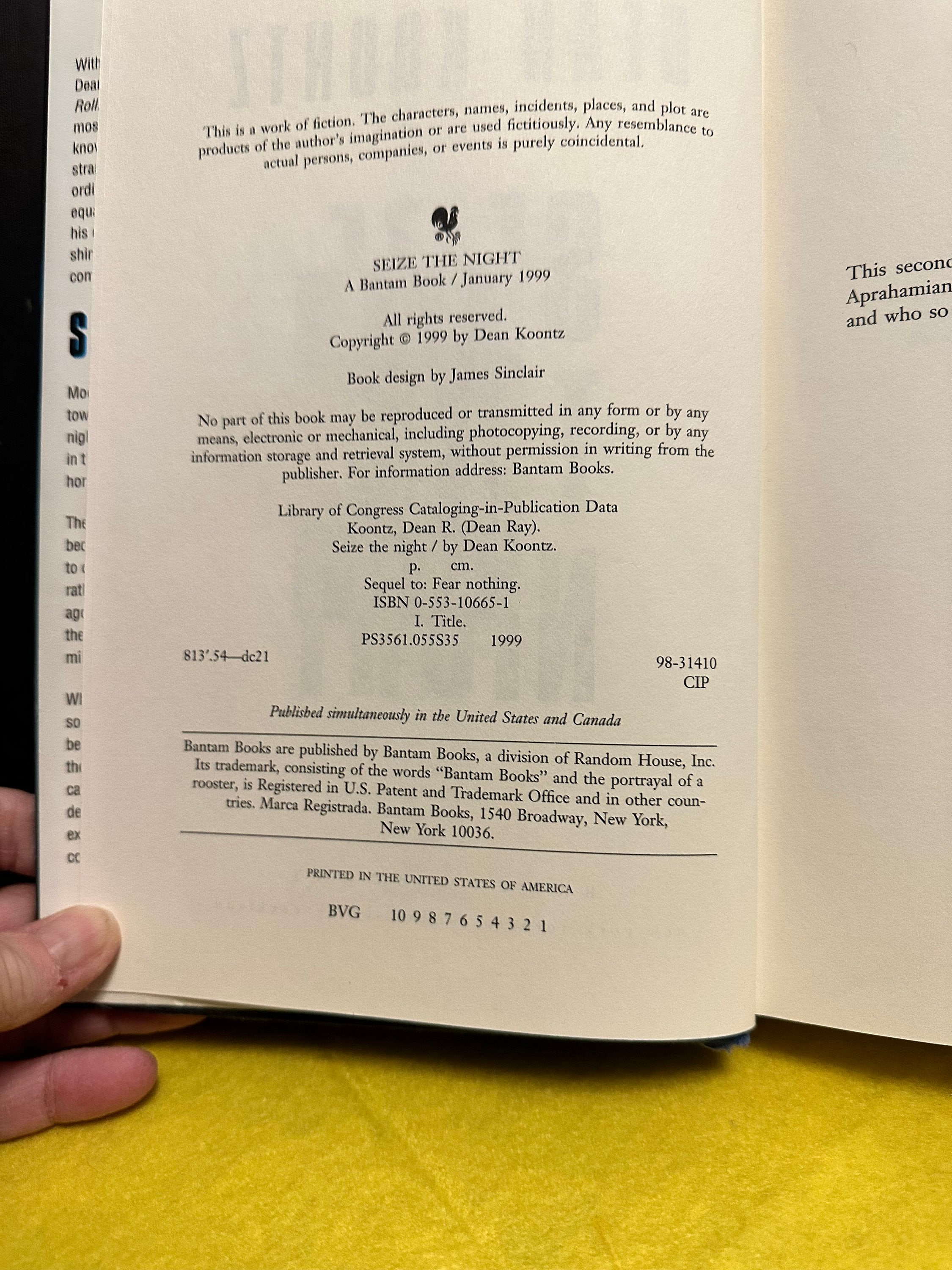 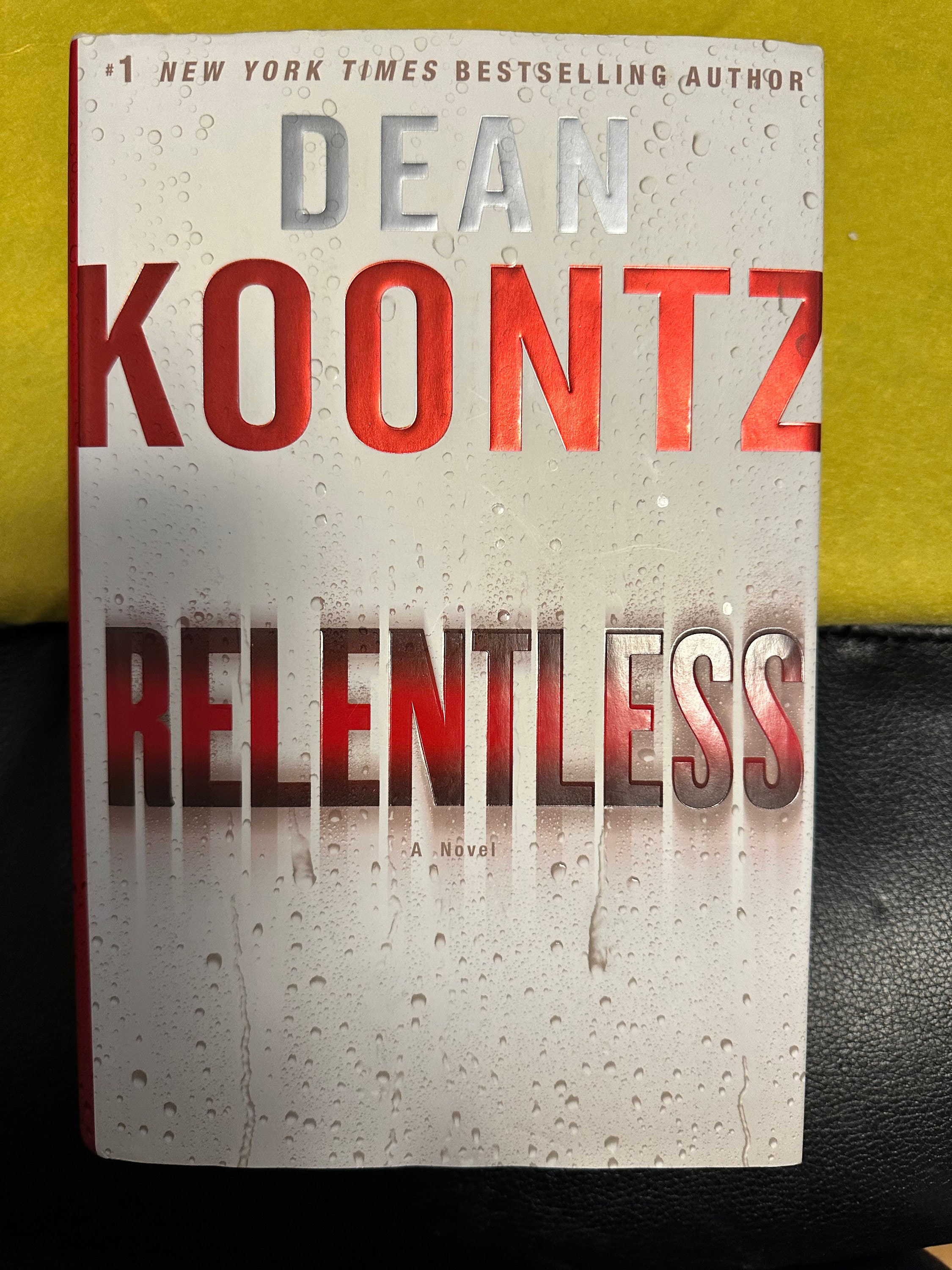 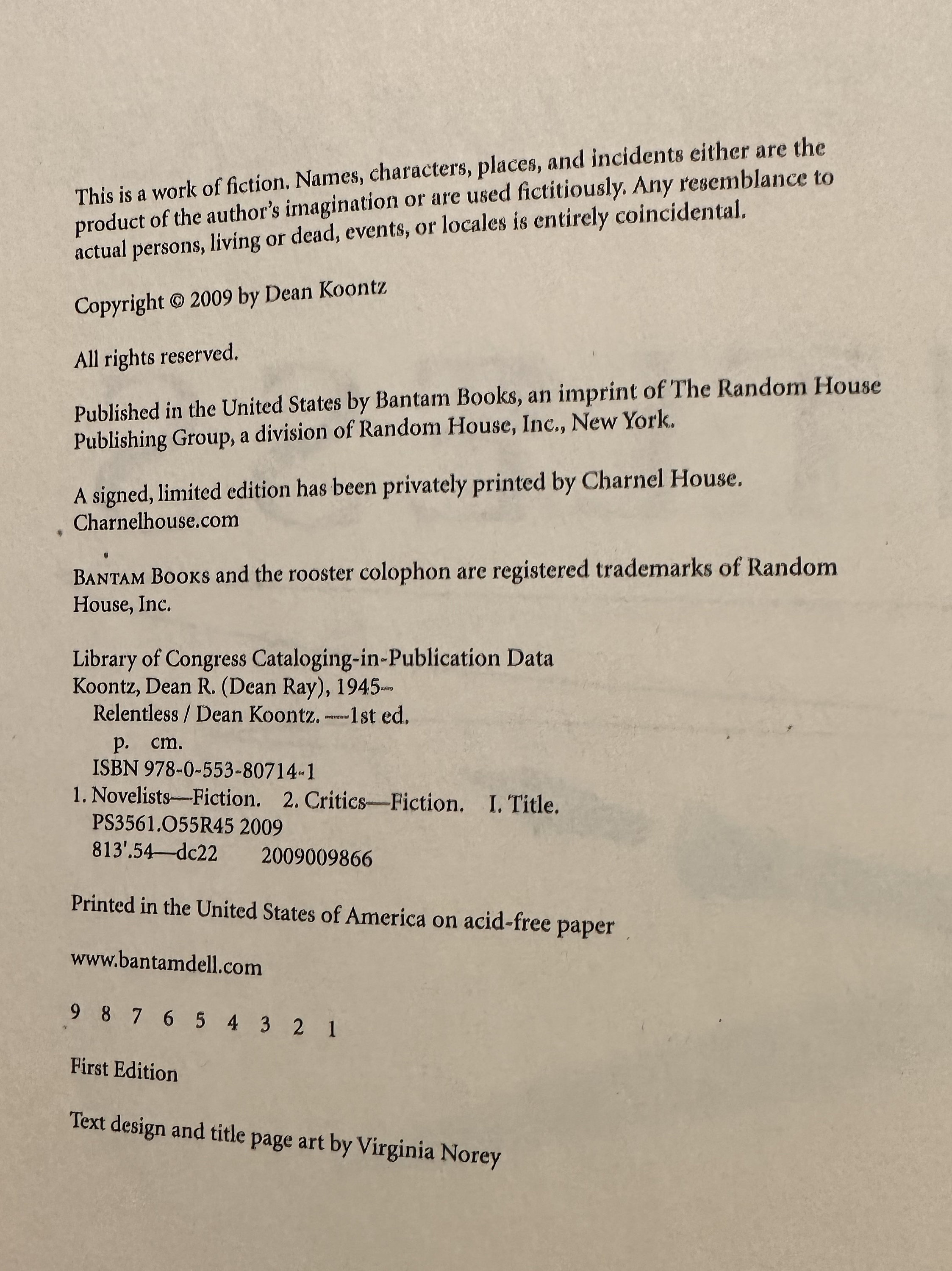 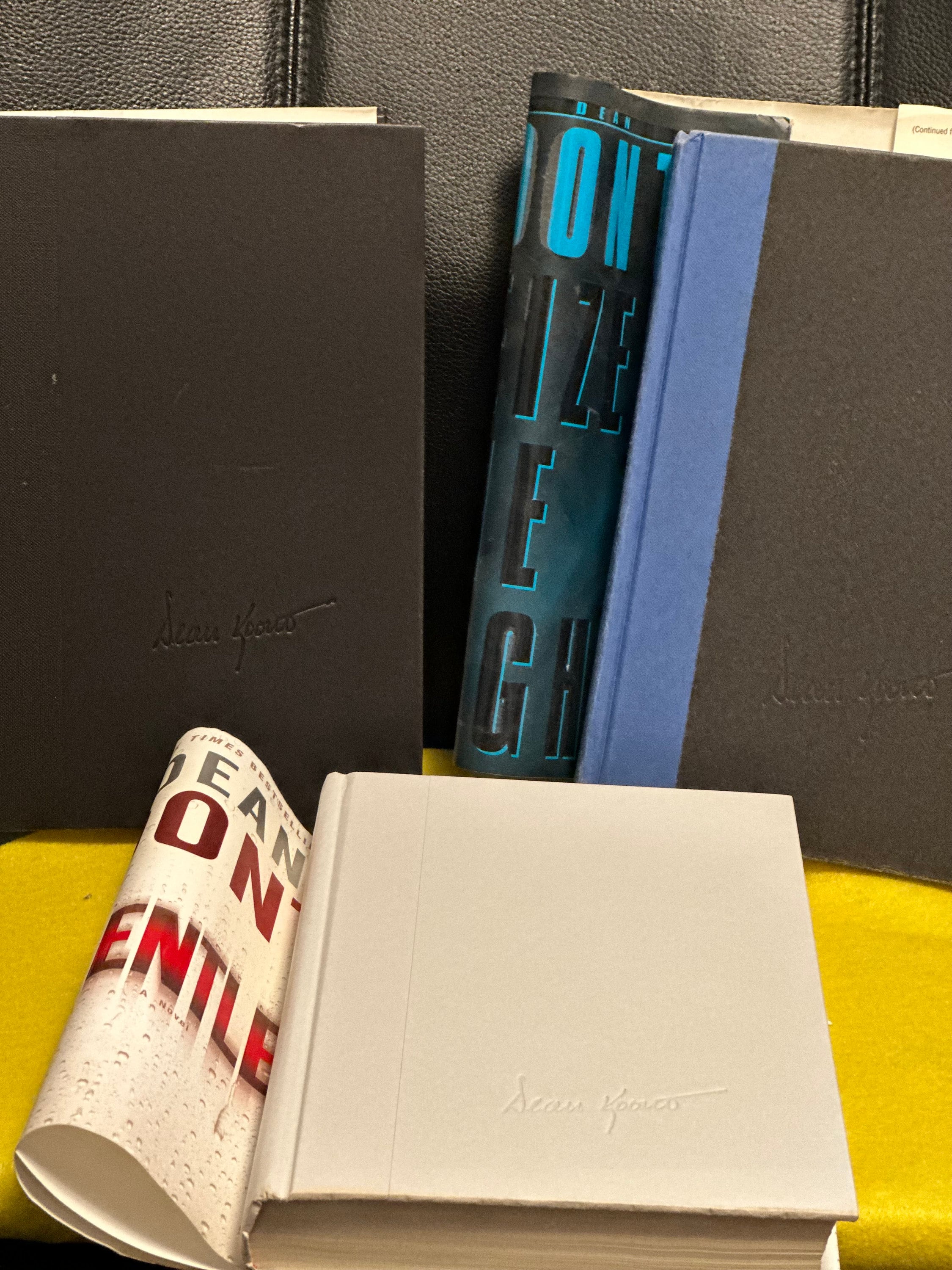 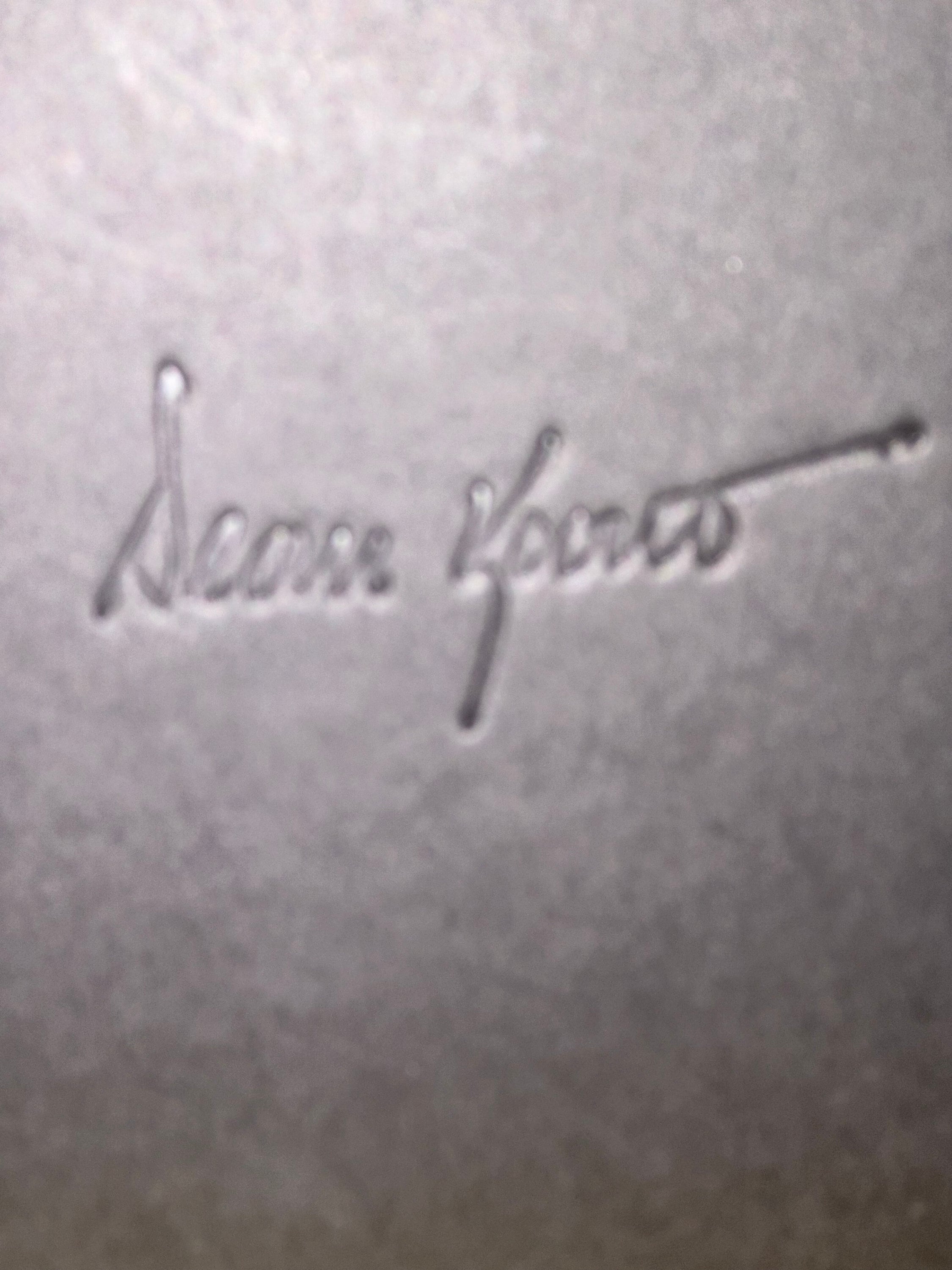 Spend $35 and get 15% off your order
Shipping to : Free
Calculate Shipping

📚All books come with a Dust Cover and have an imprint of Dean Koontz's name on the front cover. Remember that these are Vintage, but are in good condition Take a look at all the photos I have provided you.

📚Dean Ray Koontz is an American author. His novels are billed as suspense thrillers, but frequently incorporate elements of horror, fantasy, science fiction, mystery, and satire - Acknowledged as “America’s most popular suspense novelist”(Rolling Stone ) and as one of today’s most celebrated and successful writers, Dean Koontz has earned the devotion of millions of readers around the world and the praise of critics everywhere for tales of character, mystery, and adventure that strike to the core of what it means to be human. Now he delivers the page-turner of the season, an unforgettable journey to the heart of darkness and to the pinnacle of grace, at once chilling and wickedly funny, a brilliantly observed chronicle of good and evil in our time, of illusion and everlasting truth.

📚The Face: (2003) The main plot of the story follows Ethan Truman, an ex-cop who now works as the head of security for the most famous actor in Hollywood, Channing Manheim, a.k.a. "The Face." Ethan is trying to track down the sender of several gruesome "messages" that were received in black boxes. Ethan now has six black boxes to figure out what the contents of the boxes mean. After chasing down leads and tracking the "ghost" of his dead friend Duncan "Dunny" Whistler (technically, Dunny is not a ghost, as he came back to life in the morgue), Ethan finally uncovers the plot and races to stop the kidnapping of Manheim's son, Aelfric.

📚Relentless - (2009) #1 New York Times bestselling master of suspense Dean Koontz delivers a mesmerizing new thriller that explores the razor-thin line between the best and worst of human nature—and the anarchy simmering just beneath society’s surface—as a likable, successful family man is drawn into a confrontation with a foe of unimaginable malice…

Bestselling novelist Cullen “Cubby” Greenwich is a lucky man and he knows it. He makes a handsome living doing what he enjoys. His wife, Penny, a children’s book author and illustrator, is the love of his life. Together they have a brilliant six-year-old, Milo, affectionately dubbed “Spooky,” and a non-collie named Lassie, who’s all but part of the family.

So Cubby knows he shouldn’t let one bad review of his otherwise triumphant new book get to him—even if it does appear in the nation’s premier newspaper and is penned by the much-feared, seldom-seen critic, Shearman Waxx. Cubby knows the best thing to do is ignore the gratuitously vicious, insulting, and inaccurate comments. Penny knows it, even little Milo knows it. If Lassie could talk, she’d tell Cubby to ignore them, too.

Ignoring Shearman Waxx and his poison pen is just what Cubby intends to do. Until he happens to learn where the great man is taking his lunch. Cubby just wants to get a look at the mysterious recluse whose mere opinion can make or break a career—or a life.

But Shearman Waxx isn’t what Cubby expects, and neither is the escalating terror that follows what seemed to be an innocent encounter. For Waxx gives criticism; he doesn’t take it. He has ways of dealing with those who cross him that Cubby is only beginning to fathom. Soon Cubby finds himself in a desperate struggle with a relentless sociopath, facing an inexorable assault on far more than his life.

Fearless, funny, utterly compelling, Relentless is Dean Koontz at his riveting best, an unforgettable tale of the fragile bonds that hold together all that we most cherish—and of those who would tear those bonds asunder.

📚Seize the Night (1999) is a novel written by the best-selling author Dean Koontz and released in 1998. The book is the second in a trilogy of books known as the Moonlight Bay Trilogy, involving Christopher Snow, who suffers from the rare (but real) disease called XP (xeroderma pigmentosum). - Seize the Night begins a few months after Fear Nothing. It starts with Chris and his dog Orson happening upon Chris's ex-girlfriend, Lilly Wing, whose son Jimmy has just disappeared. Chris swears to Lilly he'll find Jimmy, and departs with Orson to begin the search. The trail leads them to Fort Wyvern, the abandoned military base Chris likes to explore. They search the base but soon become separated, and Orson goes missing. Fearing for his dog's well-being, along with that of Jimmy, Chris calls his best friend Bobby Halloway to join him in the search and then sends his current girlfriend Sasha Goodall to Lilly's house to console her. Soon after calling them,

Christopher Snow is back. Fans of Koontz's last offering, Fear Nothing (LJ 2/1/98), will remember Chris as the young victim of XP (xeroderma pigmentosum), a rare and deadly genetic condition that forces him to avoid light. Here, the horrifying tale of Chris's hometown, Moonlight Bay, continues to unfold. ....Koontz successfully blends his special brand of suspense from generous measures of mystery, horror, sf, and the techno-thriller genre. But his greatest triumph in this series is the creation of Christopher Snow, a thought-provoking narrator with a facility for surfer-lingo and dark humor who, despite his extreme situation, is an undeniably believable character.

This is a Must Read. The first in the series is Fear Nothing and the third is tentatively titled Ride the Storm (release date unknown).

📚📖Is Reading Good For YOU?

💥Condition is Vintage/Used. The book is in Very Good condition. Please look at the Pictures. All Sales are final. If you have any questions Blondie is always available.

📚You can find all of our Children's Vintage Books Here: https://www.etsy.com/shop/treasurechestcc?section_id=29884493

📝Stop by and Visit our New Web Page Where you can not only shop for that Special Treasure but can read our monthly story on our blog page: https://www.treasurechestcc.com/post/925023530330/good-morning-world

📬All of our items are shipped with Insurance to Protect Your Purchase. If you have any questions you can reach Blondie anytime.

Here at the Treasure Chest Collectables, we care about your privacy.

Why We Need Your Information and How We Use It

Information about our customers is important to the business. We share your personal information for very limited reasons and in limited circumstances, as follows:

Etsy. We share information with Etsy as necessary to provide you services and comply with obligations under both the Etsy Seller Policy and Etsy Terms of Use.

Service providers. We may engage certain trusted third parties to perform functions and provide services to the shop, such as delivery companies. We will share your personal information with these third parties, but only to the extent necessary to perform these services.

Business transfers. If we sell or merge the business, we may disclose your information as part of that transaction, only to the extent permitted by law.

Compliance with laws. We may collect, use, retain, and share your information if we have a good faith belief that it is reasonably necessary to (a) respond to legal process or government requests; (b) enforce our agreements, terms, and policies; (c) prevent, investigate, and address fraud and other illegal activity, security, or technical issues; or (d) protect the rights, property, and safety of our customers, or others.

Treasure Chest Collectables retains your personal information only for as long as necessary to provide you with services and as described in the shop's Privacy Policy.
However, we may also be required to retain this information to comply with local legal and regulatory obligations, to resolve disputes, and to enforce our agreements. We generally keep your data for the following period: 4 years.

Transfers of Personal Information Outside the EU

Treasure Chest Collectables resides in the United States of America and may store and process your information through third-party hosting services in the US and other jurisdictions. As a result, your personal information is transferred to a jurisdiction with different data protection and government surveillance laws than your jurisdiction, we rely on Privacy Shield as the legal basis for the transfer, as Google Cloud is Privacy Shield certified.
Your Rights

Object. You can object to (i) Treasure Chest Collectables processing of some of your information based on our legitimate interests and (ii) receiving marketing messages from us after providing your express consent to receive them. In such cases, we will delete your personal information unless we have a compelling and legitimate grounds to continue using that information or if it is needed for legal reasons.
Complain. If you reside in the EU and wish to raise a concern about our use of your information (and without prejudice to any other rights you may have), you have the right to do so --with your local data protection authority.


0 items in your cart